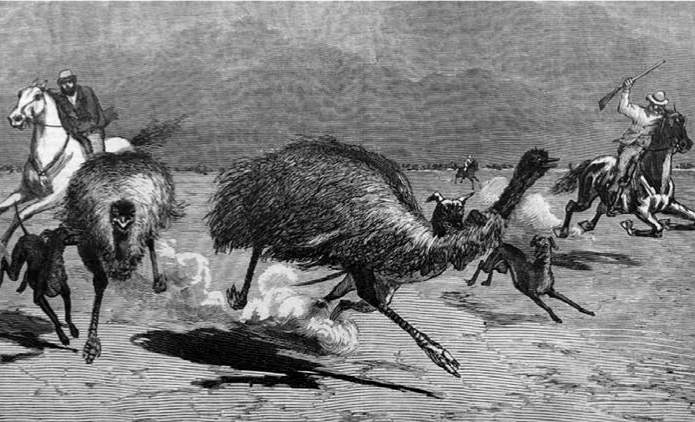 In the 19th and 20th centuries, the newspaper and journal scene in Australia was thriving, publishing news, gossip and commentary. But what about local stories? A recent project curated by Katherine Bode at ANU, To be continued … The Australian Newspaper Fiction Database, has revealed that newspapers published a massive amount of fiction from Australia and overseas which was syndicated nationally (80 per cent of newspapers contained fiction). As most of these works were never catalogued or turned into books, they were lost to readers until a mass digitisation process made the newspapers possible to access. The largest digital collection of historical newspapers in the world, Trove now features 21,000 novels, novellas and short stories.

Browsing through the fiction, it’s immediately clear how valuable these stories will be for writers, especially for historical fiction. Many novelists like to read fiction from the time when their books are set and it’s exciting to hear these diverse voices including many women (Janet Carroll, Adeline J Whitfield, Jenny Wren) and popular genres including Christmas, crime fiction, adventure, the bush, children’s/ YA and international writers like Victor Hugo. There are titles that work well as click-bait: ‘The Tamar Pirates. A Sensational and True Narrative of Adventure of the Early Days in Van Diemen’s Land.’ I discover ‘The Mount Macedon Mystery’ by Ivan Dexter (aka James J Wright), which takes place just down the road from me, published in the Bathurst Free Press and Mining Journal. The novel is broken down into 27 chapters in 1891, and its descriptions of a place that’s more frontier — wild and less settled by colonists — is a fascinating comparison to my map of the place.

There is also the opportunity to take on the role of volunteer, to search for fiction in the many digitised newspapers not yet accessed and add them to the database. Browsing through the publications available, many appeal to my own research interests and general curiosity: the Blue Mountains Daily, Sydney’s Communist Review, cross- cultural publications like Il Giornale Italiano.

I chatted recently to literary historian Katherine Bode from ANU, who along with bibliographer Carol Hetherington, embarked on this project after receiving an ARC Discovery Grant.

Where did the idea for the database come from?

Bibliographies of Australian literature like AustLit record a fair amount of Australian fiction published in 19th- century Australian newspapers. As it turns out, there was a lot more than we knew in these newspapers. But the motivation for the study — and the creation of the database — came from wondering what other fiction was published alongside these Australian stories. We know, today, that Australians are voracious readers and interested in stories from around the world: I wondered if the same was true of the 19th century —and as it turns out, it was!

What was the reading experience like at the time? Were novels serialised? Did the idea parallel what was happening in Britain?

Novels were serialised, and could be published across 50, 60, or even more newspaper issues. The newspapers also contained lots of short stories, that were often published in a single newspaper issue, or sometimes across two. In some ways the practice paralleled what was happening in Britain, in that most novels were first published in serial form. However, in Britain, these serialised novels were generally issued as books, whereas in Australia there was very little book publishing going on. Sometimes Australian authors were successful in getting their serialised work republished as a book in Britain. But very often, the newspaper was the only time these stories were ever published.

What has surprised you most in terms of the fiction you’ve come across and what it reveals about Australian society at the time?

Beyond how much of it was published, one of the most surprising things about the Australian fiction we found was the prominence of Aboriginal characters. There’s been a fairly entrenched view among researchers into Australian literature that fiction in the 19th century followed the legal practice of terra nullius in not acknowledging the presence of Australia’s original inhabitants. This has led to all sorts of theories about early Australian writing, such that it was haunted by an unacknowledged presence in the bush, creating a peculiarly Gothic character to the fiction. But Aboriginal characters were far from concealed in these stories. Many of the depictions are racist, and I think this would be expected. But there are also stories with progressive ideas about ownership of land, Aboriginal spirituality and the resilience and strength of Aboriginal people. If you’re interested in why literary scholars have for so long thought that Aboriginal people were absent from early Australian fiction, I think it’s because of the publishing situation. As I said earlier, only a very few newspaper novels were selected to be published as books — predominantly in Britain. I think that British publishers preferred stories without Aboriginal people and these books were then passed down to us as the record of Australian literature. In this sense, the question remains as to what other aspects of our literary tradition have been omitted by the way that fiction has traditionally been transmitted to us.

John Silvester Nottage is a very prolific 19th-century Tasmanian author who was unknown prior to the project and has written a number of great novellas and novels (as well as his fair share of somewhat average ones). Speaking of the presence of Aboriginal characters, I find Mary Hannah Foott’s fiction interesting — and challenging — for how it grapples with the consequences of Australia’s invasion and dispossession. Foott is mainly known as a Queensland poet, but she was also a staff writer for the Queenslander, a weekly newspaper for that colony, and contributed a number of stories in that role.

One member of the research community recently alerted me to a novel, published in the 1890s in
the Illustrated Sydney News, that features a same-sex relationship between two women, and I enjoyed reading that. The depiction of the relationship is quite subtle but I think it’s remarkable that this romance was presented — and set in the state (then the colony) of Tasmania where homosexuality was only decriminalised in the late 1990s (and by only one vote). However, the author of that story — as is the case with so much of the local and international fiction in the database — is unknown. They didn’t include their name in the publication and although we’ve been able to identify some authors through bibliographical sleuthing, this is not one of them.

Why do you think it took so long for this fiction to be re-discovered?

It was undiscovered because it was in newspapers. Until the National Library of Australia began digitising these newspapers the archive was simply too big to explore. The digitisation project made it possible to search for fiction using the words often used to introduce the stories — such as ‘our novelist’, ‘serial story’ and, most successfully, ‘chapter’ — meaning that we could identify and extract large numbers of stories that had previously lain undiscovered in the newspaper archive.

You’ve done a call out for people to volunteer to help with the project. What’s involved in being a volunteer? How are they helping the process of unearthing fiction? How can Newswrite readers be involved?

Yes please — it would be wonderful to have new volunteers from the writing community. Volunteering can mean correcting the text of the stories, which have been produced with Optical Character Recognition, or OCR, and so contain a lot of errors. It can also involve finding missing instalments of the stories as you read them (the automatic process was not always 100 per cent successful) or adding new stories to the database that you discover in the newspapers.

Although our original search was fairly thorough, I estimate that only 30 per cent of newspapers had been digitised at that time. There are now hundreds more in Trove and so many, many more stories to discover. Some members of the research community are adopting a newspaper and working through their pages to add scores of new stories to the To be continued database. One great thing about adding fiction to the database is that it will be harvested by the National Library of Australia, so that your discovery will appear in the national collection to be then discovered and enjoyed by others.

If you would like to be a volunteer, browse the fiction, or use it for your own historical research, head to To be continued … The Australian Newspaper Fiction Database. The monograph A World of Fiction: Digital Collections and the Future of Literary History features an analysis of the fiction. Orbiter Press will be publishing edited collections of newly discovered fiction including five previously lost stories by Australian author, feminist, socialist and world-traveller, Catherine Martin — whose The Incredible Journey was the first colonial novel to centrally feature an Aboriginal protagonist.

This article was originally published in the AUTUMN edition of Newswrite magazine for Writing NSW.