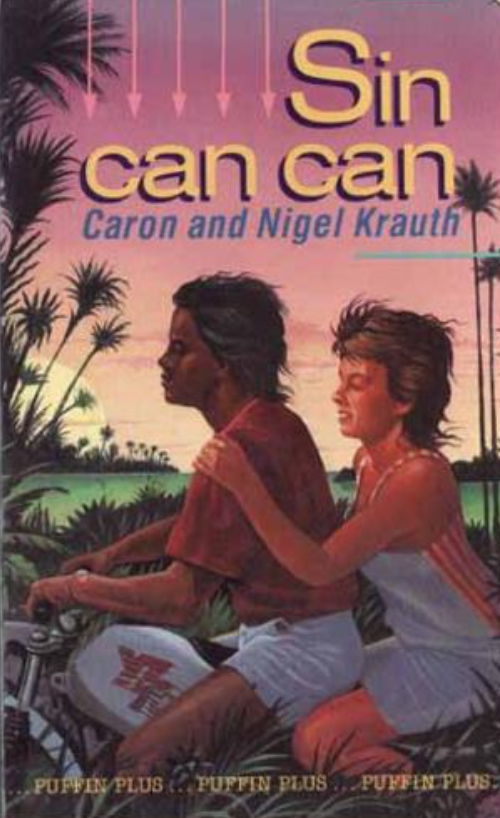 At Clunes Booktown, I shared the stage with my dad for the first time (at my first festival) and we talked about writing fathers, writing daughters, creating unique voices (we both feature 14-year-old girls in our work), what our characters share, how we translate family stories into fiction, and whether our memories ever come at things from the same angle. It was a very moving session for both of us (perhaps more than the audience realised), a sharing of ideas, sad moments, and joys too.

Here are the edited highlights (thanks to Damon Girbon for the video and editing):

Dad (Nigel Krauth) is a writer who’s had many novels published, both for adults and YA audiences. He wrote a play Muse of Fire that was performed by the Adelaide Theatre Company and directed by Keith Gallasch (now the editor of RealTime, where I worked for many years). His first book, Matilda My Darling, won the Vogel Award, and since then his novels have gone on to win a number of awards, including the NSW Premier’s Award for JF Was Here.

Although my parents separated when I was young, I spent school hols with dad. Sleeping in his study, I saw the hard work involved in bringing fiction to life. I had no romantic ideals about being a writer. I thought it involved hard yakka, building words like bricks. My dad often seemed in a state of distraction or excitement about a breakthrough. I never really thought I would be a fiction writer, not until I was in my mid 30s and struggling with the world. A friend pointed out that I needed a creative project to survive it all. And she was right. I’m not sure dad was ever too keen on me being a writer. Perhaps one in the family is enough. Perhaps it came as a bit of a shock.

Sin Can Can: I’ve been to Bali too

Dad’s first YA book, Sin Can Can, was released when I was 14 and it was basically about me. My picture is on the front cover (have I changed that much?) riding on the back of a motorbike. Inside is a dedication to me. I was both thrilled and rolling my eyes when it was released. Dad came to boarding school (I got a scholarship, ok) and read it out to my class. I sat in the back with my head on the desk, proud and cringing at the same time. But  it was so funny and had that perfect Dolly pitch of the time. The voice is fresh, direct and dynamic, bringing to life many of my passions. I was obsessed with music, and boys of course. I loved junk food. I went to boarding school in Years 7 and 8. I found boarding school tough. A private person, I hated the open dorms where you had to sleep, the locks that didn’t work on the showers, the continual noise so I couldn’t read a book — and the rules, those bloody rules (having to wear a skirt to dinner, having to serve the older girls at dinner time). But the book reminds me of the good times and the lingo: tinned tomatoes known as ‘abortions’, the gardener who we all drooled over in his khaki shorts, the Alpines we pretended to smoke.

But one thing our books share is location; as writers (and characters) we are drawn to Surfers Paradise. It’s the contradictions that fascinate us both, and contradictions are what teenagers are all about. .

When I was researching just_a_girl, I found out more about teenage girls by listening and observing when they didn’t know it, rather than asking directly. When I was a teenager, even with liberal parents, even though I knew I wouldn’t get in trouble, I still didn’t share much. I was pretty sensible. I was the one cleaning up the vomit rather than the one paralytic. I was too hellbent on control to take drugs. I didn’t like inhaling so smoking and marijuana weren’t really my thing. I didn’t like the idea of snorting up my nose so coke was out. And injections? Not a chance in hell. Now I wonder how I can raise my kids to be like that? To be independent yet safe? But I have to admit defeat. I know I can’t really guarantee it. And it scares me. But I pretend to myself that I can find out what they’re doing on their iPads. Or whatever they’re using in ten years’ time.

There’s a fraction too much friction

Having a writer around, family members and friends need to be careful. When I was growing up, everything was ‘grist for the mill’. I knew that, but I still didn’t always welcome it. All writers collect material from everywhere, waiting for the right moment to add it to the mix – or the moment waits for us, which is how it seems to work for me. Dad is more cavalier about using other people’s stories in his own work, seeking to camouflage it in some way. When I use a story relayed by someone else, I tend to ask permission and show them the text; I feel more comfortable.

You can’t handle the truth!

Often people ask you which parts of the book are based on the truth. While this is a complex question that would take a PhD to answer, there are parts of just_a_girl where I have translated almost word for word something a family member or friend has told me. Often these are conversations I didn’t want to hear at the time, for example, my dad telling me about having a trip on hash, and wanting to strangle me when I was a baby (watch the clip).

When I was in my 20s, Dad contributed to a collection called Daughters and Fathers (edited by Carmel Bird), an essay, nonfiction. I had been happy to hide behind the disguise of fiction, but seeing myself represented in nonfiction was completely different. This felt like an expose. I was glad, this time, that dad sent me the final essay for approval before publication. Because there were things in the original that I didn’t want the world to know. As it is, it’s still pretty brutal. But through all his work I now see Dad’s drive for connection with me, his daughter. It was made clear to me at Clunes, but it’s something that I couldn’t see before.

But still, there are things I have always kept hidden from Dad, knowing he might use it one day. Perhaps Layla emerged out of that secretive side, exposing the darkness of teen life.

My favourite part of the Clunes session was where Dad and I selected parts of each other’s work to read, that had transported us, represented us, made us laugh or cry.

Dad was brave for selecting the most emotional scene for him in just_a_girl, the case of the missing kittens. While I took a safer route in Sin Can Can, enjoying the comic yearnings of a teen desperate to escape her hippie parents.

And, finally, we agreed on many things throughout the conversation that surfaced at random: how writing comes from and through the body; how our work teases at power, politics and sexuality; and how choosing the right name for our characters is fundamental to getting our work going.