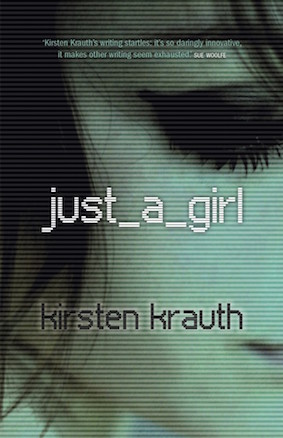 On the radio oh oh

The Bendigo Writers’ Festival kicked off with ABC Radio National’s live broadcast from the Banquet Room in the Capital theatre.

Fellow Castlemaine writer, editor and troublemaker Jenny Valentish joined me to talk with Natasha Mitchell (Life Matters), Michael Cathcart (Books and Arts Daily) and Fiona Parker (ABC Central Victoria) about girls growing up too fast and what it’s like to be a regional writer.

Both of us have ended up in Castlemaine via circuitous routes but she wins — Jenny’s from Slough, UK. (I vaguely remember The Office being set in Slough. Great claim to fame there.) Our novels Cherry Bomb and just_a_girl are quite eerie in their shared sensibility: teen girls moving through the world with irony, detachment and the desire for sexual conquest.

You can listen to the Radio National broadcast for more. The two-hour radio show was a real highlight, with local guests including Robyn Annear, who shared her art for shaping history into stories that come alive.

Girl, you’ll be a woman soon

I’ll let you in on a bit of a secret. It can be quite hard to get the powers that be to take teenage girls seriously, to consider them as the smart, complex, contradictory creatures that they are.

When you talk of Coming of Age you tend to think of Catcher in the Rye, the ‘universal’ story of growing up.

But what of teen girl voices? How do they fit into fiction aimed at adults? Or male-dominated worlds like football?

In this session, Jenny Valentish, Nicole Hayes and I talked of the Coming of Age novels that influenced us most including Puberty Blues and Are You There God, It’s Me Margaret?

We spoke of writing sexuality, of our responsibility (or lack of) to readers and how our styles reflect where we come from.

Thanks to Mentone Mif who did a little summary of the session.

She’s a brick and I’m drowning slowly: The Neighbour

After having wonderful writers like Emily Maguire and Angela Meyer take me in hand and launch my book, it was exciting to be asked for the first time to launch someone else’s.

Julie Proudfoot is a Bendigo writer who I’ve enjoyed getting to know over the past year.

Her award-winning novella The Neighbour is a beautifully written contemporary novel about grief, responsibility and a man gradually disintegrating under pressure while a small child looks on.

At the launch, Julie spoke about her desire to trace mental illness, why she loves to write in Bendigo, how she seems to have the keys to men’s sheds and feels comfortable there, and cruelty to animals (and what it can reveal about character).

It’s great to see publishers like Seizure taking a punt on publishing novellas because I love how the shortened form can add extra intensity.

You can find out more about Julie at her blog Passages of Writing and read a review of The Neighbour by ANZ Lit Lovers.

I’m dreaming of festival panels that mix children’s illustrators with horror writers with rural romance aficionados. Why do crime fiction writers (or other genres for that matter) always have to be lumped together in the programming as if they can’t participate with the Serious Writer Writers?

Garry Disher made this point in the highly entertaining session with Michael Robotham and my good buddy Angela Savage.

They talked of writing crime set in Asia, what it’s like to tour in Germany with an actor who goes on the road translating for you (attracting a handy crowd) and how it can be a mistake to just make things up in a police procedural.

After the session, Garry Disher and Angela Savage were named in the shortlist for this year’s Ned Kelly awards (this is Angela’s third nomination for the three in her trilogy).

Free drinks and cheese platters led to a night on the town with crimesters Andrew Nette and Michael Robotham who regaled us with stories behind his 15 ghostwritten books.

Bendigo Writers’ Festival continues my love affair with regional festivals. There is something about wandering along the street dipping in and out.

My only struggle was the staggered times, meaning I missed out on many sessions before and after mine. Hopefully next year events will be at the same time, with a few minutes for a coffee and chat inbetween.

And good onya Rosemary Sorensen for programming more local writers into this year’s events and encouraging uni students to take part in the conversation too. It meant a vibrant and energetic mix of speakers and punters.