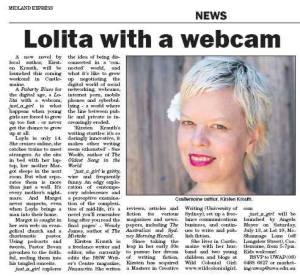 Here is a sample of reviews and media. For a comprehensive and up-to-date list, go here.

“Krauth’s debut is alive with ideas about isolation and connection in the digital age, particularly the way the internet raises the stakes of teenage rebellion. Her portrayal of Layla’s sexual experimentation will terrify many a parent, but it’s sensitively judged: not there to titillate so much as to bridge a gap of understanding.”
Jo Case, The Australian. Read review. 3 August 2013.

“This is a tough book. It’s a necessary book, and one I want to pass on to quite a few people. It’s a book that will make you question our digitized everyday, and yearn for more human connections. It’s a gut-wrenching book, taking readers to dark places and introducing characters on the precipice. It’s about porn/love, isolation/connection, sexualisation/justification, misogyny/mentality, Facebook and the face-to-face. It’s about our world, right now, and it’s a little bit brilliant.”
Danielle Binks, ALPHA READER blog. Read review. 21 August 2013. She gives the book five stars at Goodreads.

“[Krauth’s] debut novel is a welcome return to subtlety, ambiguity and the idea of literature as art. The best stories are those that bounce along at a decent clip, while at the same time gradually revealing their complexity, and finally leaving you to contemplate the consequences.”
Adrian Deans, The Book Hammer. Read review. 10 August 2013.

“The three stories [of just_a_girl] run in parallel, intersecting only occasionally as each protagonist searches for something that will give their life, if not more meaning, then at least something solid to hold on to. As it turns out, both Margot and Layla are looking for the same thing – from the same person, even – but rather than giving them common ground and closing the distance in their relationship, their quests come very close to setting them against each other as rivals.”
Adam Ford, blog, interview and review. 15 September 2013.

“I would recommend this for parents of adolescent girls who worry about what goes on in their daughter’s lives. But more importantly I would recommend it for those who don’t.”
Mellisa Wray, from Dream Big … Read Often blog. 12 October 2013. Read review on Goodreads. She gives the book four stars.

“just_a_girl is being listed as adult fiction, but I do think this would be fine for older YA readers. It deals with gritty, confronting subjects, but it’s never graphic …  just_a_girl examines the life of a young girl, exploring her sexuality, as well as the relationship she has with her parents. It’s a story that’s very relevant right now as more and more children spend time online.”
Mandee, Vegan YA Nerds blog. Read review. 13 August 2013.

“Tadashi brings with him a spectrum of emotions, including snippets of a traditional Japanese childhood, and introduces us to the shadier corners of the internet, that he ventures in to foster his feelings of loneliness and rejection. Reading the chapters from his point of view imparts an instinctively voyeuristic quality, where you are confronted with feeling like a peeping tom, yet my eyes remain glued to the page.”
Cate Leedman’s reader review, UWA blog. Read review. 29 August 2013.

“Just_a_girl is an adult novel that looks into the heart of teenage life, its darkness and light, and it’s filled with beautiful language that made me drool a little.”
Ellie Marney, hick chick click blog. Read review (and interview). 13 July 2013.

”… this idea of parents who are more child-like than their children permeates the book – and it’s very crushing and contemporary.”
Simmone Howell, Post Teen Trauma blog. Read review. 10 July 2013.

“When she speaks about just_a_girl, you can see Kirsten’s care for each of her characters, and her particular pride in their distinct voices: Layla’s choppy speech, punctuated by tangents and expletives (fuckadoodle!), Margot’s long flowing prose, and Tadashi’s more simple and poetic style.”
Nuala Kane’s wonderful rendition of my first reading and Q+A in Melbourne at Colour Box Studio. 6 July 2013.

“[Layla’s] voice was authentic and likeable, vulnerable but tough in exactly the right ratio, and ultimately this book was un-put-downable.”
The Incredible and Rambling Elimy blog gives the book four and a half stars. Read review. 6 July 2013.

“Kirsten Krauth’s ‘just_a_girl’ is a tense, edgy and compelling insight into adolescence which I read in a single sitting.”
Annabel Smith, Goodreads. Read review. 3 July 2013.

“When it comes to voice, Krauth is in her element. Online and offline, every word of dialogue hits its mark.”
Michelle McLaren, The Newtown Review of Books, Read review. 2 July 2013.

“An honest, gritty and thought provoking story about sex, power, loneliness and the desire to connect meaningfully with another soul.”
Shelleyrae at Book’d Out blog gives the book four stars. Read review. 27 June 2013.

Dream Big … Read Often: an interview with Melissa Wray at her blog, 13 October 2013.

Event: I did a reading from just_a_girl at Debut Mondays, Wheeler Centre, Melbourne, with Fiona McFarlane. 23 September 2013.

Event: Can self promotion be a creative act? I did a talk at Open Access seminar: Selling Your Book in the Digital Age, NSW Writers’ Centre, Sydney, 21 September 2013.

Disconnected in a connected world: what are teenagers doing online?, researching teenage  girls in the digital age for just_a_girl, Wheeler Centre blog, 22 July 2013.

Radio interview with Jan Goldsmith, Published or Not, 3CR. Listen to podcast. 4 July 2013.

Appearance at a pop-up bookstore: Q+A with Colourbox Studio in Footscray, 25 June 2013.

just_a_girl is born: My lovely agent, Virginia Lloyd, live from New York, on how she’s helped me through the first time, 6 June 2013.