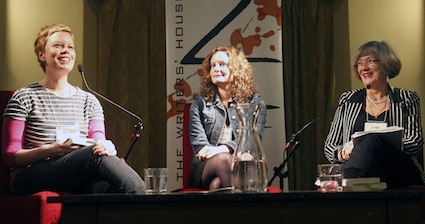 When you go up on a stage to talk about your book, the harsh spotlight and the mics and the intense concentration and the nerves means the event can fly past you even as you’re experiencing it. Something like smoking too much pot.

I was going to dredge up my disconnected and whimsical memories but — thank God — I discovered Lisa Fleetwood’s Welcome to My Library blog, which covers it so much more eloquently than I could. She’s kindly agreed to do the work for me, and let me reproduce it here…

Wow, what a great start to the Sydney Writers’ Festival! I love the day up at the Carrington Hotel in Katoomba — its such a great setting for a writers’ fest! For this blog post I will just concentrate on the first session as it featured two amazing Australian women writers. I took so many notes, it’s too much for even one blog post.

Two debut writers (but both are by no means new to the world of writing and editing) Kirsten Krauth and Felicity Castagna featured in conversation with Irina Dunn. Both authors have written fiction centred around the suburbs of Western Sydney [Felicity’s is YA; Kirsten’s was published as adult but crosses over into YA], and have explored the lives of teenage protagonists that are forced into maturity early. The discussion was informative and interesting (as a writer and a reader), and chaired brilliantly by Irina.

Felicity Castagna’s novel (which has been short-listed for a NSW Premiers Literary Award & the Children’s Book Council of Australia Book of the Year: Older Readers) tells the story of Michael, whose older brother dies at the beginning of the summer he turns 15, but as its title suggests, The Incredible Here and Now is a tale of wonder, not of tragedy. It tells of Michael’s coming of age in a year which brings him grief and romance; and of the place he lives in Western Sydney and its mix of cultures. Through his perceptions, the reader becomes familiar with Michael’s community and its surroundings, the unsettled life of his family, the girl he meets at the local pool, the friends that gather in the McDonald’s parking lot at night, the white Pontiac Trans Am that lights up his life like a magical talisman.

Irina began the discussion about the environment of the novels. How did the authors create the sense of place?

→For Felicity, Parramatta was a place she knew well, had walked and worked and lived in, and was fascinated by the mix of cultures and the small spaces where people gather — the Macca’s carpark, the Westfield food court, the local shops and the intricacies that make up a bustling city and how a teenager might inhabit that space.

→For Kirsten, her former commute from Springwood to Sydney was a plethora of research fodder for a self-proclaimed semi-stalker of people. She found that a train is a place somewhere in between public and private, a place where not all, but many people, reveal private information in a very public place, especially teenage girls. From the discussion today, I sense that the environment inside and outside the train (regular or irregular passengers, gigantic moths, the beautiful landscape passing by) will feature, but upon reading the book I am sure a further sense of Layla’s space, her inner thoughts and her online world will be revealed.

Both authors talked of wanting to elaborate more with the setting and place.

→Felicity is particularly interested in place-driven novels, but both commented on the need to strip back the description to write a character study rather than setting.

→Kirsten realised that her characters wouldn’t notice the environment as much as she would. Kirsten’s comment struck a chord with me — why hadn’t I thought about that before? I have sometimes used description in my novel as merely a need to get something across to the reader, but would a teenage boy (my protagonist) notice the lines of a building, what it was made of, or the sunlight sparkling on the cascade of a waterfall? Maybe not. Time for yet another edit maybe.

The discussion moved on to how the authors captured the teenage voice. How did they do it so well?

→Felicity, as a former teacher in a boys’ high school, had seven years’ experience observing teenage boys and how they speak and react, but within that she wanted to create a poetic, lyrical voice with a teenage usage of similes and metaphors.

→Kirsten was fascinated with what she would sometimes hear on the train, the ease at which teenage girls would freely talk about their escapades (sometimes sexual) in a public space, but she was also interested in the private/public space of the internet and how much could be gleaned about people without their knowledge.

When researching her book (which actually began as a character study), Krauth found that talking to teenage girls didn’t reveal to her the information she was looking for, but all she had to do was sit back and listen — on the train, but also online. Her book also explored the digital medium of lonely people who can’t connect in everyday life but connect online privately on a public medium, or so they think. Krauth found that it didn’t take much to find out where someone lived, what they liked and who their friends were. She found it easy to get inside the minds of teenage girls, so how easy would it be for a sexual predator? Something to think about for me with a teenage daughter. We have had a ‘internet is turned off when Mum goes to bed’ rule for a long time. This rule won’t be changing anytime soon!

What were their influences for these novels?

→Felicity’s childhood YA reading (while living abroad) introduced her to a form of writing called ‘vignettes’ and she used this style to write her novel. A vignette is a short impressionistic scene that focuses on one moment or gives a trenchant impression about a character, idea, setting, or object, or in Felicity’s words — a series of ‘short short stories’. She then puts her stories into linear fashion and fills in the gaps.

→Kirsten’s quotes Room by Emma Donoghue, The Curious Incident of the Dog in the Night-Time by Mark Haddon and Rocks in the Belly by Jon Bauer as influences for their clarity and fresh voice, as well as the naive voice (of a child) and a terrible sense of dread.

Definition: Plotter –  Outlines novel before sitting down to write it. Pantser – Sits down at the computer each day, waiting to be surprised, writing your book literally by the seat of your pants.

→Kirsten — definitely a Pantser. She wrote the first draft without planning or plotting and without re-reads or editing. As soon as she mentioned doing her Masters with Sue Woolfe, I knew what she meant! (I will do a blog post about Sue Woolfe soon). I did a fascinating day course with her last year. Her view is that over-planning and plotting limits the imagination, reins it in. Where would our imaginative brains have taken us if we weren’t corralled by a firm plot? Kirsten talked of writing scenes in fragments and moving the scenes around to where they fit best. What voice appears in the story after first draft? What emerges as the heart of the story, the main theme?

→Felicity wasn’t quite as definite. I recall her nodding to the question of being a Pantser. Perhaps she may have been combination of the two, but her form of writing — the Vignettes — leans towards a Panster. These vignettes may have been her first ‘pantser’ draft, then upon second draft spent some time plotting and, as she said, ‘fills in the gaps’. If she reads this post, perhaps she can confirm! It was hard for both authors to answer all of the questions fully with the limited time of the session, or maybe I simply missed her response while scribbling notes.

There was further discussion regarding multiculturalism and how children perceive it, internet research and the dangers of connecting online, the world of self-marketing as an author, and comparisons between growing up in the 80s compared to teenagers in the digital age. A question from the audience touched on the perception of adults about teenagers, and the discussion led to the intelligence and sensitivity of children and teenagers, and how there is a big gap between their inner thoughts and feelings, and how they present themselves to the world, which could lead to an incorrect perception by adults.

Both authors read short excerpts from their books which gave me a real sense of the characters and the place setting. I am really looking forward to reading and reviewing them.

To read more about Felicity Castgana click here for her personal website go tohttp://www.incrediblestories.net.au for a teaching guide for her book.

Book images and synopsis from Goodreads.