I’m very excited to announce that the ALMOST A MIRROR podcast theme song is out today! Yesssss…. As many of you know, I’ve been busy teaching myself how to do a podcast (my kitchen table is a mess of microphones and monitors) about late 70s to 80s Australian songs – and the theme song has just launched on Bandcamp. You can download it here!

The brilliant Michael Simic has written the song, with LE TROUBLE (Michael Mooney – Michel Lunaire) and Kay Proudlove on vocals. Michael & Michael are co-producers. It has a great feel of melancholy mixed with pop – it reminds me of sitting in a John Hughes movie watching Molly Ringwald. I love it!

It’s been so exciting to collaborate on this project with many regional musicians and a big shout out to Michael M and Kay who are in lockdown Wollongong way.

We are just doing finishing touches and the podcast is coming out in August! Each episode is sparked by a particular song and Episode 1 is on Nick the Stripper by The Birthday Party. It will be available on iTunes and Apple Music, and wherever you like to listen to podcasts…

Please follow the Almost a Mirror page on Bandcamp and let me know what you think! I’ve chosen Bandcamp because musicians actually get paid for their music on this platform. Please support them…

A big hug to Josh Durham for the wonderful design.

MICHAEL MOONEY aka LE TROUBLE: Michael is a composer, performer and producer who has plied his trade across the full garment of media; film and television soundtracks, major festival touring, advertising, video games, podcasts, immersive museum exhibitions and, more recently, in remote communities in Australia. Winner of the John Lennon Songwriting Contest and the Bronze Lion at the Cannes Advertising Awards, he is also frontman for Montréal’s Le Trouble. The band signed to New York’s Lava Republic Records (Lorde, Jessie J, The Weeknd) and played major festivals across Europe and The Americas, and supported bands like The Flaming Lips, Vampire Weekend and The War on Drugs. 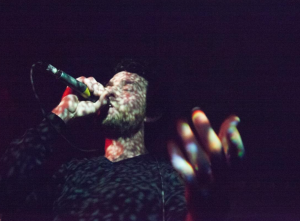 KAY PROUDLOVE: Kay is a Wollongong raised indie-folk singer-songwriter with a remarkably agile, engaging, honest, soul-bearing voice and a wry, dry-ice sense of humour. With a live performance style that is much like being invited into her lounge room, her songs are truly stories set to melody, by turns relatable, humorous and heartbreaking. Creating an intimacy between audience and performer through vulnerability, Kay’s live show is likely to leave you wondering whether all of her songs are about you. Kay has taken part in various projects throughout the worlds of folk music, musical theatre and the dramatic arts, most recently composing songs for the black comedy stage show ‘See You Later Mum’ (Edinburgh Fringe Festival 2020, Adelaide Fringe 2021). 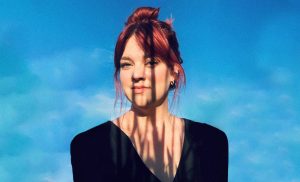 MICHAEL SIMIC: While his long term band Mikelangelo and the Black Sea Gentlemen celebrate their 20th anniversary this year, Michael recently rebirthed his solo career with his new album Caravan Songs. He has released 11 independent albums and performed sold out shows at music venues, theatres, and majors arts and music festivals through Australia, New Zealand, UK, Europe, Canada and the US. He has won Best Artist at the Brighton Festival (UK), and Best Group with Mikelangelo and the Black Sea Gentlemen at Edinburgh Festival (UK), Brighton Festival (UK) and the Green Room awards (AUS). He has been three times nominated for Best Male Artist at The Age/Music Victoria awards alongside artists such as Paul Kelly, Archie Roach and Gotye, and nominated for a Helpmann award for Best Music for the Kate Mulvany play Masquerade. He now lives in Braidwood with his wife Rose and daughter Sunny and loves to champion local musicians. 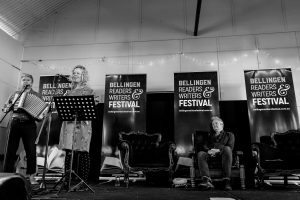 About the Author: Kirsten Krauth

Kirsten Krauth is a writer, editor and arts journalist from Castlemaine. Her second novel Almost a Mirror was published by Transit Lounge and shortlisted for the Penguin Literary Prize. The Guardian named it one of the '20 Best Australian Books of 2020'. She is currently working on a podcast about Australian post punk and pop music from the 70s/80s. She has a PhD in creative writing from the University of Canberra and her writing on literature, music, film, pop culture and photography has been published in The Saturday Paper, The Monthly, Sydney Morning Herald, The Australian and Overland magazine. jenniferturner.com.au/kk
Page load link
Go to Top