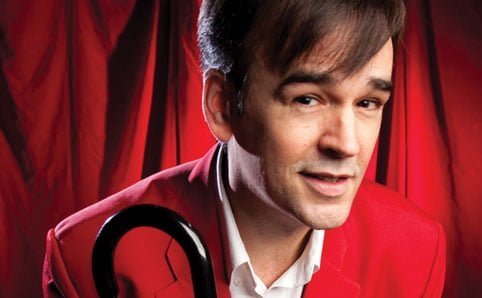 Tim Ferguson may want to throw off the shackles of being a Doug Anthony All Star but I’m not going to let him. I’m 18. It’s New Year’s Eve. It’s late. It might even be midnight. I’m feeling like I’ve taken an E but the rave scene is yet to come. I’m screaming like those girls at the Beatles. I’m in the audience for the Doug Anthony All Stars and a girl in doc martens is chasing Paul McDermott around the stage like she’s going to eat him alive. She is fast but he is faster. They are both completely desperate. I want to be her.

DAAS had a huge impact on my life at the time. They were inventive, creative (I bought a great deal of their memorabilia), sexy, at times scary and often just plain filthy. I spent many hours weighing up which one I desired most. Poor Richard never got much of a look in, but I was drawn to Paul’s on-the-knife-edge humour and voice (of course) and Tim’s sweet looks and sense of vulnerability (and ability to harmonise). Once I saw them lounging (and I think Richard fell off his chair) at Mietta’s (where I was pretending to be posh by ordering a Brandy Alexander, the way you order completely wrong drinks when you’re 18) and spent hours trying to work out a strategy to approach (and which one to choose) by which time they’d left. They were like Violent Femmes meets Monty Python: a heady mix.

I always followed their careers as they meandered through Good News Week, Don’t Forget Your Toothbrush and Radio National. I felt that Paul and Richard kind of found their natural fit in the media but with Tim, I was never so sure. His puppy dog cuteness meant he could get away with everything, but he still always seemed too subversive for mainstream Channel 9. He’s wandered his way around to teaching and writing about comedy, now wielding a big stick, and it works.

His memoir, Carry a Big Stick, traces the usual steps: childhood, parents, family, poor sportsmanship, difficulty with girls (who could have thought?), monumental success, looking for jobs in all the wrong places, and a body that starts to let him down. He reveals here why he walks with a stick:

When you’re reading memoirs (good ones), they trigger memories as you search for connections. Tim’s career is clearly shaped from early experiences. When he talks about moving from school to school, never settling, it reminds me of the many times I was new kid at the door, teachers doing their best (or very little) to settle me in. I love Tim’s interrogation of the strategies he would use for making friends; I had my own.

I also start to recognise, with an increasing sense of dread, characteristics I fast-tracked to my later years — influenced and explained by the transient life: the fear of being unmoored; the inability to handle conflict; the desire to be noticed (if indirectly); and the strange way I used to let friendships sail off without me.

I was constantly nervous and didn’t know why … it was the dread of drifting … The ache for performance racked me. I was desperately, breathlessly jealous of my friends and lovers, envying their lackadaisical confidence in their futures. Adrenaline would kick my system at the slightest change in their circumstances.

I hadn’t learned how to lose my temper – after so many years in strange seas, why would I have learned to rock the boat.

As attracted as I was to new people, I had to maintain the friendships I’d already developed. The darker side of the many shifts of my childhood had given me an ability to let people drift away as soon as they were out of my line of sight.

All of these things struck a nerve because I could see the threads going back, unravelling, to my time in the playground. As a child I desperately craved standing out (for my passions) while being at the same time extremely self-conscious. These two competing forces often threatened to tear me apart. For Tim, he desperately wants fame for the same reasons. He sees a therapist, who comes up with:

… after my childhood attending so many schools in so many cities and towns, I was after something beyond cash and a gang. I was anxious to achieve a feeling of recognition, to no longer be considered an anonymous ‘new kid’.

This becomes the driving force for Tim’s career — and the strength of his memoir is based on it. I lingered over that passage for a long time, as it revealed something profound to me. It explained my desire to write just_a_girl, and the sense of release that writing it achieved. It was like all those ‘new girls’ in the playground had merged to become Layla and my adult self could shuffle forward like a Darwinian monkey to stand tall and walk away.

Tim also frames the Doug Anthonys’ success (and his general desire to perform) within an analysis of a wider Australian culture:

Australia’s convict past instilled in the culture a deep suspicion of anything classy, clever or feminine … No other country would bother with such self-defeatist numb-nuttery. Only Australians strive to pretend they’re dumb and downtrodden.

Given his years of practice, you’d hope Tim’s memoir is funny. This is his forte and what he’s spent most of his life researching. At times cocky, at times blunt, Tim challenges the accepted view (especially among filmmakers; they get a good serve) that good dramatic writing needs to be, well, serious. He argues that the two masks — comedy and tragedy — are weighted equally, that all drama writers need to learn the craft of comedy too. It’s an interesting observation, especially as some of the best Oz television at the moment straddles that tragi-comedy divide beautifully: I’m thinking of Rake, Offspring, Chris Lilley’s exceptional series and The Moodys.

While Tim lets the audience in to MS and its effects, his intention is made clear: he wants no sympathy. The focus is on working around the illness and carrying on. Sometimes this skating around topics means there are obvious gaps. For example, he refuses to talk about his children, his former relationships, his breakdown. While I understand this reluctance, it means there are layers to him that we miss. To not see him as a father, for example, given the wonderful evocation of his own dad, is ultimately frustrating.

But for Tim, it all comes back to the comedy. And what’s the grand principle?

Surprise the audience with a truth they recognise.

I guess that’s why the Doug Anthony All Stars appealed to me so much. I saw myself in their diatribes against and for feminism, art, wankers, and musical genre. They tore down my defences and allegiances, and rebuilt them in ways that challenged, frightened and excited me.

As for comedy, I’m working on learning from his approach. I find just_a_girl and Layla’s adventures pretty funny in parts but most readers use the word ‘disturbing’. Before I write the next novel, I’ll be looking into the craft behind comedy — and using it to get up to no good.

What about you? Were you a Doug Anthony All Stars fan? Have you ever tried to write comedy?